Depending on how much time you spend on Media & Technology news pages, you may or may not have heard about Ello.co the new kid on the block looking to take on Facebook. Ello is still in Beta and you can’t set up your account until you’ve received an invite; either from a friend who’s already a user or direct from the site a long while after you’ve joined the waiting list. This creates a sense of exclusivity and hype. The first problem of exclusivity and hype is that you’ve really got to live up to it.

I got my invite from another user and then went on to offer an invite code to any of my Facebook contacts who were interested, a small handful jumped at the chance to get on board. 2 weeks on, we’re all sat around with pretty empty, inactive accounts.

A couple of the reasons for this are apparent the moment you sign in: 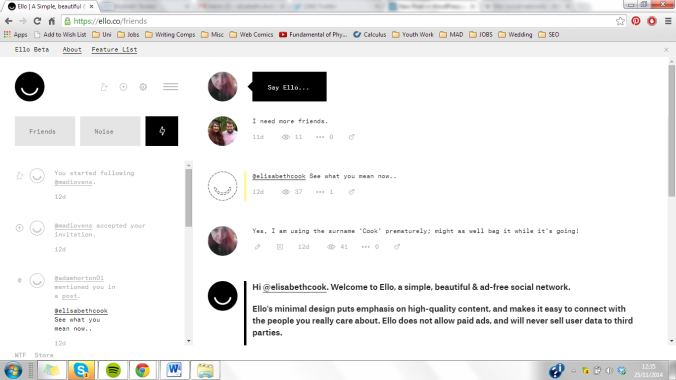 These are just aesthetic issues, which I decided to look past in order to see what the site was like. But we’ll call them strike one all the same.

First thing I did once I was signed up was read the About section (trendily headlined ‘WTF’). It’s all a bit high and mighty. The main selling point of Ello is that there’s no advertising. Their Manifesto argues that other social networks (read: ‘Facebook’) regard users as ‘the product that’s bought and sold’, (I’m not going going to dwell on it, but this phrase reminds me of Stop the Traffik‘s tagline ‘People shouldn’t be bought and sold’ and I’m not sure I’m okay with that). Ello, on the other hand plans to make money by having certain features that users have to pay for. Now this is fine on a MMORPG, but I don’t know how well it will work for a social network. Examples of what kinds of features users will have to pay for haven’t been given, but I can’t help but feel they’ll either be so irrelevant to what people want from social networking that users won’t bother paying for them, or people will be so put out by having to pay for something that is free elsewhere that we’ll all decided we don’t mind being advertised at all that much. Granted this is speculation on my part, so I won’t give them a strike for this, instead I’ll wait and see if Ello’s business model has any success IRL.

So then it was time for me to leave the pages of FAQs and become a ‘user’ proper. Problem is, I still don’t really know what Ello is supposed to be for. It seems to be facing itself against Facebook, but really I think that the newbie is trying to be a bit of everything. Users are able to split people into Friends and Noise; Friends are people you really care about who you want to see detailed updates from (this is how I use Facebook), while Noise is where you put people who you just want brief updates from that you can browse through quickly (this is how I use Twitter and previously Tumblr). This in itself isn’t a bad idea, I can do all of my following on one website (if you know, anyone used it). The problem is, however, in the posting. If I choose to upload an album of photos of holiday hijinks there’s no way for me to have only people I consider Friends see this. So, every post has to be Noise-audience appropriate. Sure there’s privacy from advertisers, but there’s no privacy from every other Ello user, whether I have chosen to link with them or not. No matter the rhetoric of their Manifesto, this is not a Facebook alternative; strike two, Ello.

So, then, in my books Ello’s not out, but they’ve only got one strike left.

I accept that Ello is in Beta and it was not their intention, originally, for the site to go public at all, but they have now. I interned with a start-up social network type platform, so I appreciate that developing the look of a  new site, adding features and developing usability is a slow process, especially for a small team, but I had expected more progress to have been made since April.

Phew, this was a long one!

If you want to share your opinions on Ello.co, comment below or tweet @ElisabethShuker. If you want to check the network out for yourself, get in touch and I’ll happily send you an invite.

Error: Twitter did not respond. Please wait a few minutes and refresh this page.